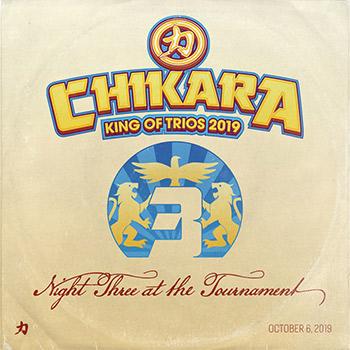 The biggest tournament in all of professional wrestling crowns just three athletes as “King of Trios” - and heading into the conclusion of the weekend, the field has been reduced to only the Final Four teams! Competitors from across the globe have vied for supremacy and worldwide bragging rights, and before Night Three is over, just one trio will be left standing. There’s so much more to Night Three than just the scheduled tournament bouts, as the massive Tag Team Gauntlet returns once again, with ten total teams trying to dominate the ring, in a winner-stays-on style match! Acrobatic newcomer Lady Frost is searching for a tag team partner in order to participate in the Gauntlet, but will anyone be able to tolerate her abrasive manner long enough to walk down the aisle? Plus: in a first-time ever confrontation, breakout star Alex Zayne crosses paths with childhood rival The Whisper, reigniting the war that had raged in the underground circuit years before either athlete turned pro. Now, both are more experienced and more dangerous than ever…but only one can be king!