The path I am on is steady. Unwavering. My ultimate victory is growing ever closer as I continue to prove myself to be the superior Ophidian. Win the Rey de Voladores tournament? Check. I did so in less time than the inferior Ophidian.

Secure the Young Lions Cup? Done. An accolade he never earned. I took it with ease. Everything is exactly as I have planned.

Do you understand now? This power you have wasted for so long? Do you see now what could have been? Overtaking the mind of your opponent and controlling their every move. Two kinds of people I suppose. You were the first. I am the second. The type that makes people hurt each other. The type that makes people lose motor function, rendering their bodies useless. Look what I’ve accomplished as a result.

While your accomplishments now pale in comparison to my own, this whole time I’ve felt something has been… missing. It was only recently that I realized what I had left to do. What I needed to truly cement my victory. Los Campeonatos de Parejas. More importantly. The Osirian Portal. Your greatest failure will become my greatest achievement. It was your duty to protect him, and you failed with flying colors. What you let die last year, I will resurrect. On October 28th I turn back the clock on the Portal of Osiris - the very same thing that brought you CHIKARA - to December of last year. I’ll forge my path to greatness in the place of your darkest hour, and I’ll do it with the Pharaoh you failed for the last time.

Indeed, I haven’t been entering sleep mode as easily these past few days—the anticipation of finally getting back in the ring is simply too overwhelming. Tomorrow afternoon. “Tooth and Caw”. It’s a big day for X2K, and a big day for CHIKARA.

I still don't quite understand how they're gonna stream this event tomorrow, even on their fancy new DSL connection. It's mind boggling.

At any rate, Sylverhawk and I will attempt to gain our third point toward contention for Los Campeonatos de Parejas. This is the same type of match in which we won our second point back at ""Aniversario: School Reunion", a 4-corner tag match.

Man, it seems so long ago... A Sylver Splash and a Xwanton Bomb to that loudmouthed Crawdad, and victory was ours, indeed. Tomorrow, we’ll do our best to ensure history repeats itself.

Things are different this time, however. We’ve got new opponents—ones Sylver and I haven’t yet faced. The Chucks and the Rumblebees are both extremely capable teams, and heck, the Bees are former Campeones, after all! They'll take plenty of focus and cunning to overcome, and it'll be a fun challenge to mix it up with those two teams, for sure.

But the fun stops there. Quite. We have a specific target in this match: Hermit Crab.

Sylverhawk certainly hasn't forgotten the physical and emotional pain he endured when his back was nearly broken at the hands of Hermit Crab. And even though I managed to take the Young Lions Cup from Crab at the "Hour of Power", the wounds are still there. I still have a displaced rib from that power bomb on the edge of the ring. Hermit Crab has yet to receive a proper receipt, and Sylverhawk wants to make sure he gets it.

Lastly, of course, there's the concussion.

At King of Trios I took out Cassandra Miyagi and in doing so, pinged my head off the floor so hard it made Nytehawk cry when he saw the swelling. Spoiler alert: Nytehawk doesn't cry.

It was grueling therapy this past month. Every single day took all I had to control my emotions and continue to put in the work. Making the walk down that cold corridor leading to the X2K infirmary where I'd be examined for hours each day. The mainframe insisted that it was necessary, and for my own good, and for the good of the team.

But I felt like a guinea pig. Whatever the test was, it was like hammering all over my skull.

The headaches are all but gone, and I've been cleared to return. The mood swings persist, and I just get angry no reason at all. So very angry...

Sylverhawk and I are on our way to becoming Campeones de Parejas in the next few months and, if we succeed, we'll be the first team to each win both the Young Lions Cup trophy and Campeonatos de Parejas in the same year. Now that, friends, would be fly. 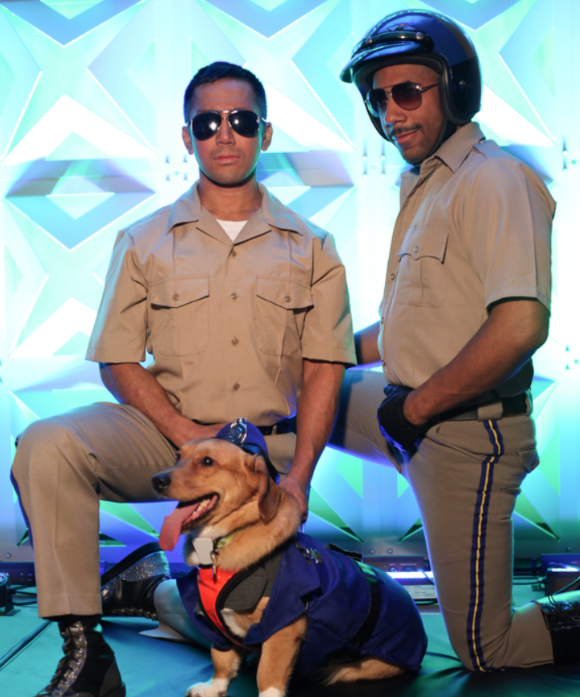 Duty. It's the one tenet that calls all men and women in blue to serve. It was the virtue that inspired Officer Magnum and me to respond to Officer Barksdale's repeated radio calls for backup.

When we arrived within the talented tag team division during Season 17 I knew that The Force would be fighting uphill to ascend the ranks, much like Barksdale, Magnum, and I did as police officers. We were able to subdue our opposition using stellar teamwork. The motivation of fighting for justice often provided the boost we needed when situations looked dire.

Then came the afternoon of March 4th, our shot at los Campeonatos de Parejas. On multiple occasions we were moments away from capturing the gold, however Crummels and Defarge's tactics were superior on that snowy day. It seemed to start a downward spiral for The Force. Whether we were complacent, full of hubris, or just caught a string of bad luck, we could not get our momentum back. This feeling was reminiscent of the leads in a case going cold. It was completely demoralizing. So The Force went back to the bulletin board and revamped our technique. We were ready to start anew after King of Trios.

At the end of a training session last week I received a call from my former police chief. She asked me to return to police work, citing that the district was in shambles since I left. A wave of urban unrest was brewing and my no nonsense approach was the best solution. I have had two vocations in my life, professional wrestling and law enforcement. Giving less than 110% of myself to either was a disservice to both.

After much deliberation with my team, we were at a standstill. As I laid my head down to sleep that night, I was reminded of the satisfaction I felt after a long shift knowing that my city was safe for another day. I recalled the surge of emotions felt from a relieved mother uncontrollably hugging me after the safe return of her child. And I could never forget the gratification knowing that my citizens could rest easily while I was on an overnight patrol. I knew that returning to police duty at my previous post in the First District of D.C was the most altruistic choice.

My moments in a wrestling ring, while short, have been unforgettable. I leave Barksdale in the four capable paws of Officer Magnum. Barksdale has also found good, reliable backup in the form of Dez Peloton. I think those energetic cyclists are a magnificent fit compared to my pragmatism. I wish them all the best of luck. Lastly, thank you citizens of the CHIKARMY. It is your support, which drives us wrestlers to make the sacrifices we do for this craft. It has been my honor to serve you.