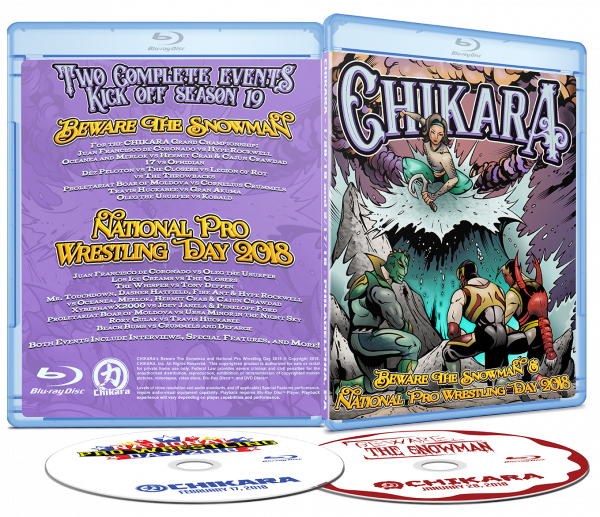 Beware the Snowman SEASON 19 PREMIERE - We kick off a brand new season of CHIKARA at our homebase, The Wrestle Factory in Philadelphia! The Grand Championship is on the line in the main event, and points are up for grabs as four of our finest tag teams fight it out! Plus: the superior "Ophidian" looks to bury 17 once and for all, but some secrets just won't stay buried. Oleg the Usurper is beyond fed up with Kobald, and the Prince of all Goblins may regret his abusive ways, as he clashes, one-on-one with the mad viking warrior!

National Pro Wrestling Day 2018 Our own national holiday and annual tradition returns - and the line-up is an historic one! All three of CHIKARA's championships are up for grabs on this card, the Grand Championship, los Campeonatos de Parejas and the Young Lions Cup! Plus: the road to the Tag World Grand Prix 2018 starts here with the first pair of tournament qualifiers. The years-long rivalry between Ophidian and Frightmare at last reaches its epic conclusion, in a match that can only end when one wrestler submits, and Travis Huckabee looks to prove himself against Rory Gulak one more time!

Own both events on this two 1080p Blu-Ray set for one low price!