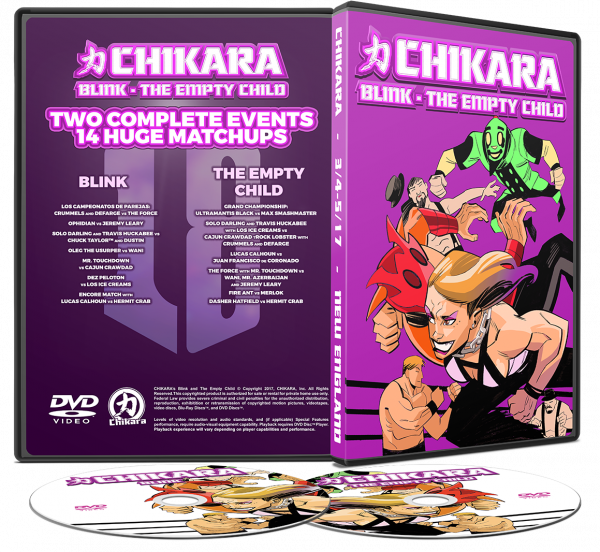 Blink and The Empty Child DVD

Blink: Don't even blink. Blink and you're missing Sonny Defarge & Cornelius Crummels attempt to escape the long arm of the law with their Campeonatos de Parejas as they defend against The Force! The unlikely duo Chuck Taylor™ & DUSTIN try to earn their third point at the expense of Travis Huckabee and Solo Darling. Plus: in singles action Jeremy Leary faces off against the master of Snake Style, Ophidian.

The Empty Child: Max Smashmaster attempts to capture the ultimate prize as he takes on the CHIKARA Grand Champion UltraMantis Black! In trios action, "Mr. Touchdown" Mark Anglosetti joins forces with The Force to battle the unlikely trio of Jeremy Leary, Wani and Mr. Azerbaijan. CHIKARA's hottest property Fire Ant tries to be the first to defeat the powerful piranha known as Merlok in singles competition! Also: an action-packed Relevos Atomicos that will make you cry out for mummy.