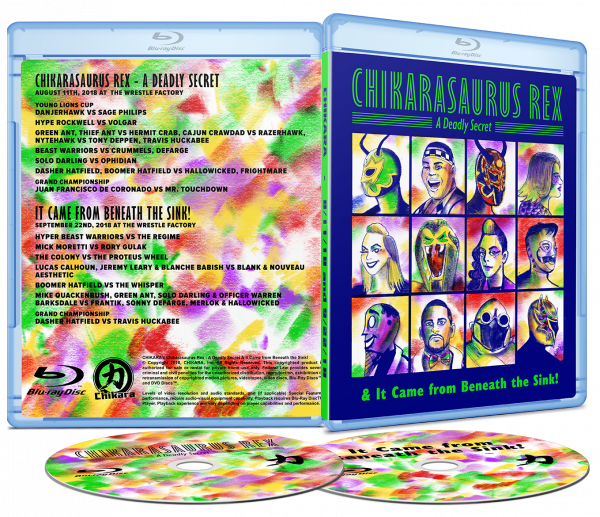 Chikarasaurus Rex: A Deadly Secret and It Came From Beneath The Sink!

Chikarasaurus Rex: A Deadly Secret: Our summer spectacular, "Chikarasaurus Rex" will take place in Philadelphia, Pennsylvania! We're at homebase, The Wrestle Factory, to send summer off in the mighty CHIKARA manner! On tap for this card: two title bouts, and the debut of Dasher's #1 son, Boomer Hatfield! Plus: The Beast Warriors are out for a pound (or two) of flesh from the men who double-crossed them last month!

It Came From Beneath The Sink!: On Saturday afternoon, September 22nd the entire CHIKARA gang invites you to be part of "It Came From Beneath The Sink!" With the injury to Mr. Touchdown sidelining the champ indefinitely, Dasher Hatfield will serve in the interim, defending the Grand Championship for the first time against #1 contender Travis Huckabee (winner of the Johnny Kidd Invitational 2018)!

Own both these events on two 1080p Blu-Ray Discs!

It Came from Beneath the Sink!