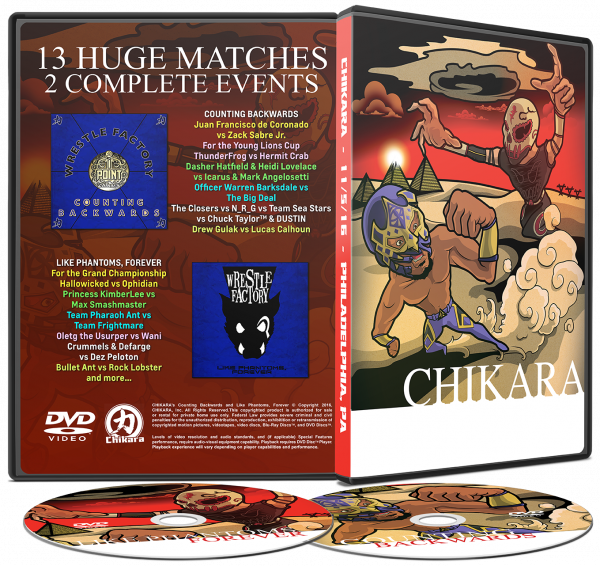 Counting Backwards Lucas Calhoun wants to test himself against the breakout star of 2016, Drew Gulak, but in Philly, Drew has the home court advantage! Chuck Taylor enacts one of the clauses in his agreement with DUSTIN, and the two team up for the first time ever at "Counting Backwards"! In a scientific wrestling display of the very highest caliber, Juan Francisco de Coronado of Ecuador has a career-defining match against Britain's Zack Sabre, Jr. and the stunning result earns a massive standing ovation from the capacity crowd!

Like Phantoms, Forever Our final Philly tour stop for the season see two Wrestle Factory trainers square off for the Grand Championship of CHIKARA! Things get out of control in a heated atomico match that features four of Nazmaldun's fiercest warriors facing Pharoah Ant (the transformed Amasis) and members of The Colony. In a bout that is well over a year in the making, Princess KimberLee looks to end her personal rivalry with super heavyweight Max Smashmaster, who has evinced a decidedly sadistic streak since being reinstated to the roster!