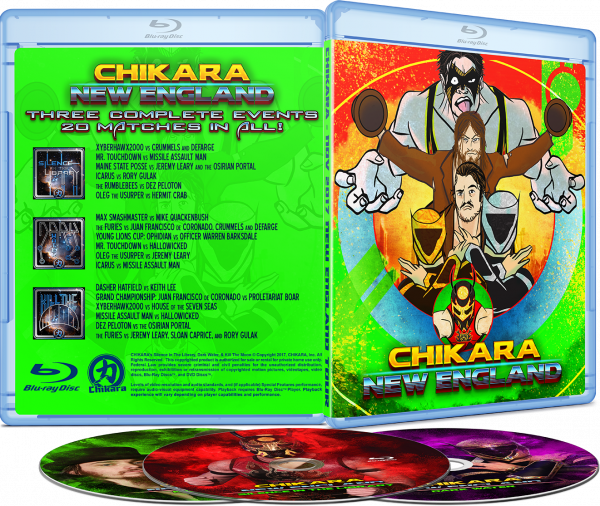 Silence in the Library: Our return to the Pine Tree State sees two top tag teams collide, as the acrobatic Xyberhawx2000 look to soar over all the dirty tricks of the so-called "legitimate businessmen" Cornelius Crummels and Sonny Defarge! The Rumblebees look to capture their 3rd point and secure a title shot at the elusive Ice Creams, while Oleg the Usurper looks to reignite his singles career, having suffered enough alongside Kobald. The Maine State Posse makes their CHIKARA debut, and rematched from Chicago are Rory Gulak and Icarus, determined to discover who is the superior grappler!

Dark Water: At "Dark Water," Mike Quackenbush steps back into the ring to finish a rivalry that dates back years! Complicating matters is the addition of an "enforcement official," that being Sidney Bakabella. Dasher Hatfield joins forces with The Rumblebees to take on the treacherous trio of Juan Francisco de Coronado with Crummels and Defarge. Plus, the Young Lions Cup is defended for the final time in Season 18!

Kill The Moon: "Limitless" Keith Lee makes his CHIKARA debut, and he's the only obstacle between Dasher Hatfield and a shot at the Grand Championship! In trios action, the Xyberhawx2000 look to put a punctuation mark at the end of their evolving feud with the House of the Seven Seas. The new Osirian Portal are confronted by a specter of CHIKARA's past, one that The Whisper helped unearth. Plus: in the biggest bout of his entire career, the Proletariat Boar of Moldova cashes in his 3 points for a title bid against Juan Francisco de Coronado!

Own all three events on this three 1080p Blu-Ray set for one low price!

Silence in the Library