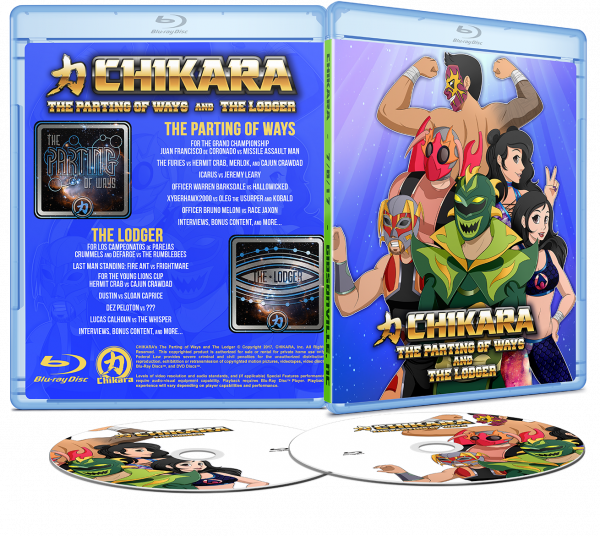 The Parting of Ways and The Lodger Blu-Ray and DVD

The Parting of Ways: The Grand Championship is on the line, when Juan Francisco de Coronado defends against long-time rival, Missile Assault Man! They've split their past two encounters, but with The Whisper offering to help Missile Assault Man overcome the effects of his post-traumatic stress disorder, will it give him the clarity he needs to claim the biggest win of his entire career? Plus, tensions rise between Hermit Crab and Cajun Crawdad, as their impending bout for the Young Lions Cup looms on the horizon! At the goblin's request, Oleg the Usurper teams with Kobald for a most curious tag team encounter with two members of the flyest trio in the galaxy, Xyberhawx2000.

The Lodger: Frightmare's reign of terror has endured for more than 2 years at CHIKARA, but Fire Ant looks to put the "spectre of violence" down for the count in a Last Man Standing match! Also featured are two title contests, including a Young Lions Cup bout that pits two partners against each other - the Hermit Crab must answer the challenge of the Cajun Crawdad! In the main event, Solo Darling uses her Golden Opportunity to put The Rumblebees in line for a shot at Los Campeonatos de Parejas, but the dirtiest players in the game aren't likely to let go of their prized baubles without a fight!

Own both events on this two 1080p Blu-Ray set for one low price!