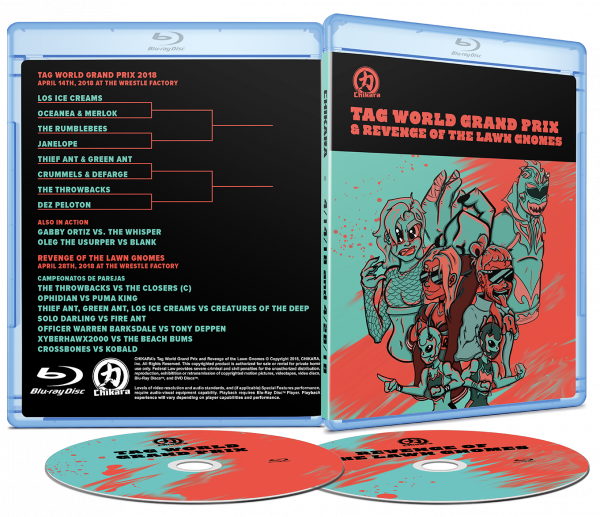 TWGP: One of our longest-running traditions is the mighty Tag World Grand Prix tournament - it dates all the way back to Season 2! A diverse field of 8 duos converge on our homebase, The Wrestle Factory in Philadelphia to vie for supremacy. Only one team will emerge having collected three points, those three golden coins, and a crack at the titles. Plus: Gabby Ortiz made quite the impression at the Young Lions Cup, how will she fare against the former Young Lions Cup champion? And Oleg the Usurper must cut a path through the Nouveau Aesthetic to get his hands on BLANK, much like the Proletariat Boar has been trying to do.

Revenge of the Lawn Gnomes: Solo Darling must fly solo after the dissolution of The Rumblebees, and Ophidian is put to the test against breakout star of CMLL, Puma King. The Creatures of the Deep follow Oceanea into atomicos action, and CHIKARA favorite Crossbones makes his only Season 19 appearance, facing off against Kobald! Tony Deppen finds favor with Gen-1 Original Icarus, the Xyberhawx2000 fight for their 3rd point, and in the main event, The Closers defend their Campeonatos de Parejas for the very first time! But the proceedings are overshadowed by a few revelations, delivered to the live crowd direct from the lips of our reigning Grand Champion!

Own both events on two 1080p Blu-Ray Discs

Revenge of the Lawn Gnomes